Computers may seem pretty simple, but that is because a lot of effort has gone into making them easy to use (hopefully). Which means we don’t need to know the complex workings of our computers to reap the benefits of them, that is until something goes wrong.

The modern computer is a very complex maze of tiny wires and bits of silicon which we connect to electricity. On top of those intricacies sits yet more complexity in the form of the software such as the operating system (Windows or iOS), drivers and applications. Meaning when something goes wrong, it can be a quite the mystery with a long list of suspects.

For that reason, performing mobile computer repair is a lot a lot like being a detective investigating a crime; you have to analyse the clues to find out whodunit. So here are some insider tips on how to uncover the right clues.

Your operating systems is complex and performs a lot of different tasks, often simultaneously, and much like you, when it gets overburdened it gets fluster. When this happens, files get put in the wrong spot, meaning you next go to use an application, you operating system can’t find part so it, which can then cause further corruption.

The signs: Windows will often alert you to system errors such as missing files, but if you persist in ignoring them, you might see the ultimate system error, which isn’t technically an alert, rather an action in your computer not being able to load into windows.

Whenever there is an issue with a computer, most people’s first response is that they must have a virus, sure half the time they’re right, it is still just a guess, and many an investigation has been lead astray by making such faulty assumptions.

The Signs: Your computer is running noticeably slower than usual (even after a restart). Random toolbars have appeared in your browser that you don’t want, or you’re being directed to web pages that you’ve never clicked on.

When we talk about hardware issues, it encompasses a lot of electronic components, from the power cable all the way through to the DVD tray. A lot of the components serve only singular purposes, meaning their faults can be easy to isolate. Other components though, such as the motherboard, CPU and RAM, which form the engine of the computer, can cause a multitude of different problems. Hardware issues can also unfortunately be caused by software issues such as corrupt or missing drivers (which are like the chains of a bike between the hardware and the software).

Signs: If your computer makes new beeping noises right after you turn it on. If it starts to not just slow down but freeze entirely then that is also a telltale sign you may have hardware issues.

Pro Tip: Your computer hardware can overheat, so don’t put jumpers on them, save that shenanigans for your cat or dog. 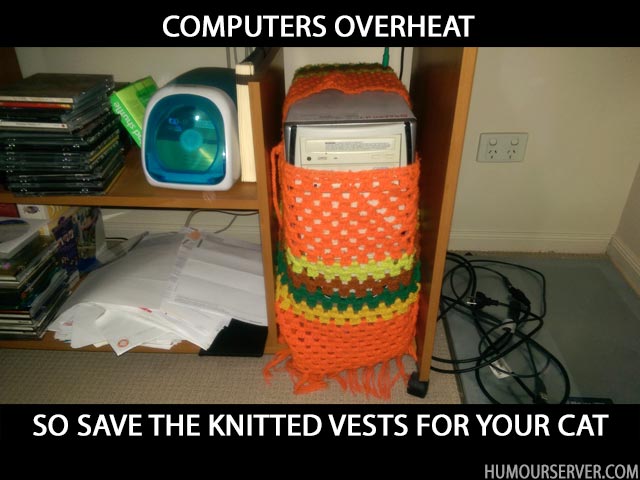 If you’re using WiFi to connect your computer to the internet, then it is being connected via radio waves. So if all of a sudden you start to experience trouble with your internet connection, and you can easily rule out that it’s not because your computer is currently driving through a long tunnel, then something could be wrong.

Unfortunately like with a lot parts of computers, there is often both a software and hardware element to them which can go wrong. So it could be a problem with the modem’s hardware or your ISP. And on your computer’s end it could be issues with the wireless receiver hardware or software. Only via a rigorous systematic investigation will you be able to get to the truth.

When computers break down, you’re often the only witness that can be called upon to help with the investigation, but because of this, you’re also the prime suspect. Meaning when a tech turns up, sadly you’re going to have to be interrogated, don’t worry though, we don’t do Good Tech, Bad Tech, as there are no bad Tech.

You’re reclining in your office chair, acting nonchalant, while really your insides are all twisted. You’ve been working all day in this two bit office, toiling away on the Morrison Account Projections. You only left the room for a couple of minutes, but when you came back in, your computer was dead to the world!

You asked around but no one said they saw anything, but you’re not so sure. Jim Butler in sales has made it no secret that he’s looking for a promotion and he’s been acting really nice to you, ever since it’s happened, which has only heightened your suspicion.

Thankfully the tech has arrived and as he walks efficiently over to you, you feel confident that he can crack the case and get you back online. He tells you everything’s going to be alright, before making a hilarious quip about computer viruses.

After half an hour of intense keyboard taps and an occasional mouse click here and there, he manages to get the computer running again, with your word document flashing on the screen. He then spend 5 minutes trying to explain to you that it was a problem with a missing registry something or other. You smile politely not really listening or caring, you’re just happy that they’ve saved the day.

Does your Computer Need a Touch Up?

This site uses cookies. By continuing to browse the site, you are agreeing to our use of cookies.

We may request cookies to be set on your device. We use cookies to let us know when you visit our websites, how you interact with us, to enrich your user experience, and to customize your relationship with our website.

Click on the different category headings to find out more. You can also change some of your preferences. Note that blocking some types of cookies may impact your experience on our websites and the services we are able to offer.

These cookies are strictly necessary to provide you with services available through our website and to use some of its features.

Because these cookies are strictly necessary to deliver the website, refuseing them will have impact how our site functions. You always can block or delete cookies by changing your browser settings and force blocking all cookies on this website. But this will always prompt you to accept/refuse cookies when revisiting our site.

We fully respect if you want to refuse cookies but to avoid asking you again and again kindly allow us to store a cookie for that. You are free to opt out any time or opt in for other cookies to get a better experience. If you refuse cookies we will remove all set cookies in our domain.

We provide you with a list of stored cookies on your computer in our domain so you can check what we stored. Due to security reasons we are not able to show or modify cookies from other domains. You can check these in your browser security settings.

We also use different external services like Google Webfonts, Google Maps, and external Video providers. Since these providers may collect personal data like your IP address we allow you to block them here. Please be aware that this might heavily reduce the functionality and appearance of our site. Changes will take effect once you reload the page.