Home » Is Your Computer Really Slow?

When our computers begin to play up most of us are not in a position to figure out what’s wrong let alone fix it, but as with our own personal health issues no one can resist some good old fashion self diagnosis on the internet. Unfortunately it isn’t very reliable though, personally, the number of times WebMD has told me that I’m presenting all the symptoms of Spanish Flu, I shouldn’t be alive. But I am and I’ve never been to Spain and I don’t even like chorizo.

When it comes to computers and their symptoms, viruses are the first scapegoat when anything out of the ordinary happens, followed by poltergeists. The truth is computers can run slowly for a myriad of reasons, anywhere from a physical hardware issue, all the way through to user error. There are also a plethora of sneaky people on the internet trying to take advantage of you and your device.

So here are some things to watch out for.

While browsing on the internet, if an information box comes up on your computer telling you that it is running slow and that the box can help you by clicking on it; this is a trick. Don’t be fooled, this box doesn’t know anything about the unique snowflake that is your computer, it’s merely preying on your confirmation bias which tells you that, yes your computer isn’t as fast as you remember it being! Don’t get suckered into it, by clicking on the link they’ll ask you to download a program that is most likely malware or demand money for a tool that might not be able to solve your problem.

If you were driving along in your car and someone on the side of the road offered to make your car run faster, would you throw them the keys and let them have at your 10 year old hatchback? Hopefully not! If you do think your computer is running slow perform a full virus scan, defragment your hard drive or find someone you trust to give it a tune up.

Viruses are an intrusion into your computer that can cause a varying number of problems. The easiest way to discover if a virus is causing your issues, is when a virus scanner tells you it is; as it’s a lot more adroit at scanning individual files for malicious code than you. Of course on very rare occasions viruses can be so sneaky that your virus scanner doesn’t spot it, which is why people tend to blame any computer problem on viruses.

A virus going undetected doesn’t happen as much as it once did though. For one; virus scanners have improved detection methods, so if your using a recommended virus scanner which is up to date, it will still find the virus, even if it can’t remove it, so at the very least you know that a virus is in the system. So if you’re computers acting funny, don’t immediately assume it’s a virus. 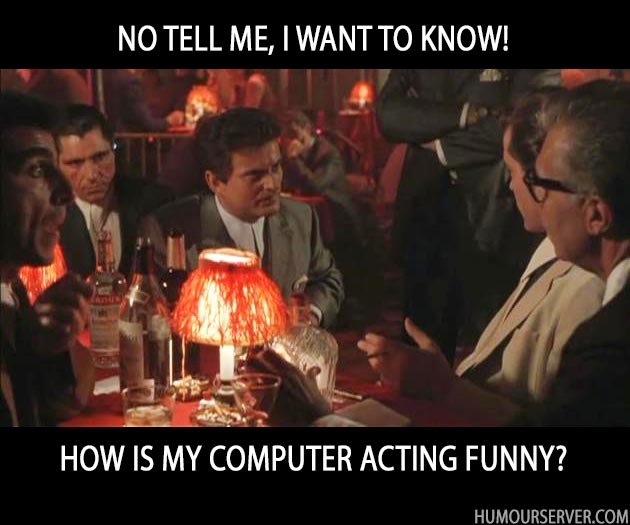 What a tool! Bar

Another issue that can slow down your internet browser, and therefore perceivably your whole computer is a toolbar or two. You can easily tell if you’ve been infiltrated by one of these due to the telltale search bar that will appear at the top of your browser under your bookmarks or address bar, or another sure fire sign is when you open up your browser and it goes to a website that you never told it to go to.

Your antivirus program might not pick this up, as it’s not actually a virus or doing anything malicious to your computer, but it will be using your computing processing power. The reason that it doesn’t get picked up is that in most cases you’ve accepted to install it. 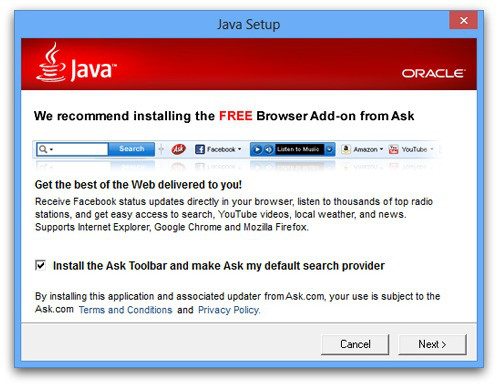 You may not remember you did, but that’s only because some cagey software developer or website coder has bundled it with another piece of software and included it’s acceptance as part of another program installation. Which you’ve been so keen to get your hands on, you’ve blindly clicked through every window of the installation without noticing the toolbar inclusion. These toolbar add-ons generally only happen with free software as a way for the developer to make money off their creation, but still most of the time you don’t need to install them, if you’ve already done it sometimes you can easily uninstall them in your program manager, but other times it can be harder to remove and you may need to get some help.

One immutable fact in this world is that every time after the first time you turn on a new computer, it will progressively impress you less and less with it’s speediness, until you feel like every time you load a browser window your life is slowly being leached away. There is no way around this feeling, and this isn’t taking into account any decrease in performance due to malicious viruses or faulty components. This is purely because you will get used to the speed and then it will stop seeming fast.

Solution: If you want the speed of your computer to seem fast once again, then one thing you can do is purposefully harbour a few viruses or load up on some browser toolbars to slow down your computer. One month later all you have to do is free yourself from their crippling action, and then you will experience a nice boost to your computers speed.

Note: We don’t recommend doing this

We’re talking internet limits here, not psychological ones that may be preventing you from using your computer. Every month you will have an internet allowance, and once you go over that allowance chances are your Internet Service Provider (ISP) will throttle your internet speed down, making it feel like you’ve gone back to having a 28.8k dial up modem from the 90’s. The trick here is that many ISPs count both your uploading and downloading as part of your limit, so if you utilise file sharing sites, upload lots of videos and photos to Facebook, your limit might go quicker than you think. Keep an eye on your usage and understand why it happens. If you keep going over your limit and your internet gets crippled, you may need to consider a bigger plan.

This site uses cookies. By continuing to browse the site, you are agreeing to our use of cookies.

We may request cookies to be set on your device. We use cookies to let us know when you visit our websites, how you interact with us, to enrich your user experience, and to customize your relationship with our website.

Click on the different category headings to find out more. You can also change some of your preferences. Note that blocking some types of cookies may impact your experience on our websites and the services we are able to offer.

These cookies are strictly necessary to provide you with services available through our website and to use some of its features.

Because these cookies are strictly necessary to deliver the website, refuseing them will have impact how our site functions. You always can block or delete cookies by changing your browser settings and force blocking all cookies on this website. But this will always prompt you to accept/refuse cookies when revisiting our site.

We fully respect if you want to refuse cookies but to avoid asking you again and again kindly allow us to store a cookie for that. You are free to opt out any time or opt in for other cookies to get a better experience. If you refuse cookies we will remove all set cookies in our domain.

We provide you with a list of stored cookies on your computer in our domain so you can check what we stored. Due to security reasons we are not able to show or modify cookies from other domains. You can check these in your browser security settings.

We also use different external services like Google Webfonts, Google Maps, and external Video providers. Since these providers may collect personal data like your IP address we allow you to block them here. Please be aware that this might heavily reduce the functionality and appearance of our site. Changes will take effect once you reload the page.